This sponsored post is brought to you thanks to my friends at Hills of Africa. Founder Sandy Salle was born & raised in Zimbabwe and her love for Africa shows with the adventures that she and her team plan as well as her in-person enthusiasm. This was a sponsored & compensated trip and all opinionated opinions & observations are 100% my very own.

This trip was in collaboration with GIFTE – the Global Institute for Travel Entrepreneurs – I can’t think of a better way travel to halfway around the world than with a travel company founder as well as a group of expert Travel Advisors?!

Spoiler Alert – Cape Town, Stellenbosch (wine country), Cape Peninsula and the Cape of Good Hope in South Africa are all a virtual paradise. No question. It has Mediterranean-like weather, a big city cosmopolitan feel in Cape Town, rugged landscapes, gorgeous fauna & flora, amazing & varied cuisine, you must visit and spend a good chunk of time. My return wish list would include at least 5 days in each area!

South Africa is home to a diverse landscape that comprises everything from pristine beaches, rugged mountains and craggy cliffs, to dense forests, crystal-clear lagoons and lush winelands. 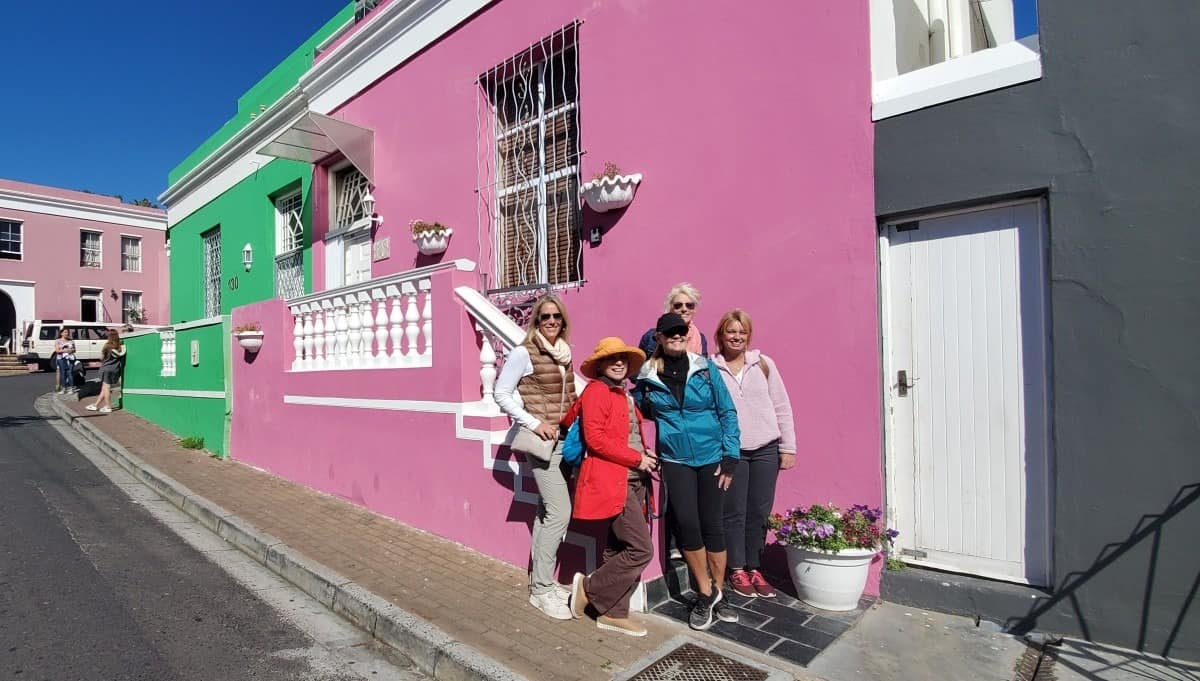 Pamela McOnie & her team included some absolutely amazing stops including the colorful Bo-Kaap area in the heart of the Cape Malay community and included coffee shops, restaurants, and shops. We started the day with a quick drive up to Table Mountain and fresh pastries from Jason Bakery. Then it was off for a whirlwind of stops including:

Also interesting to hear how local businesses survived the drought from a few years back and how they’ve modified their water consumption habits and are still cautious with water use. 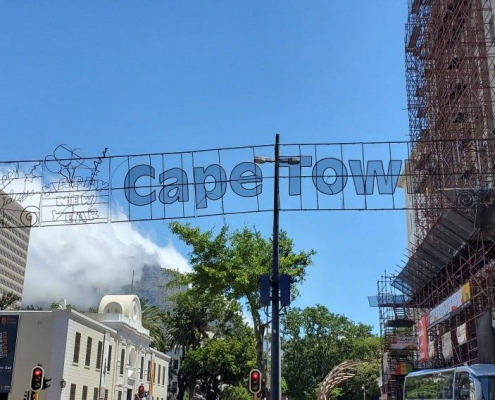 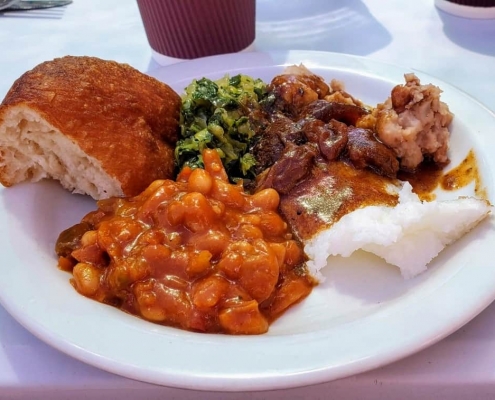 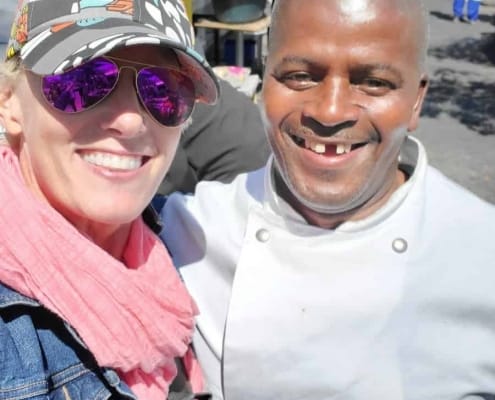 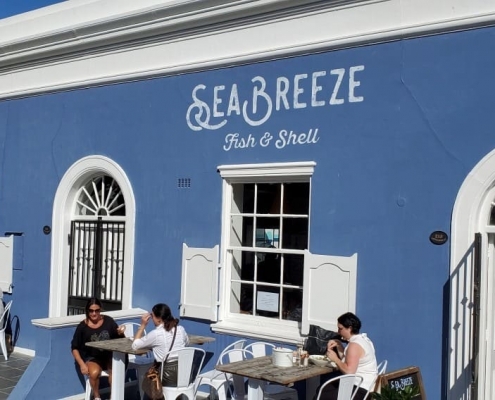 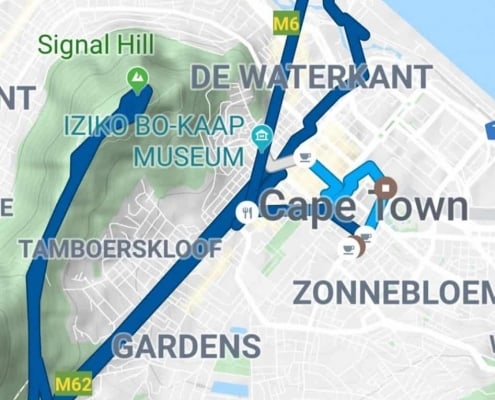 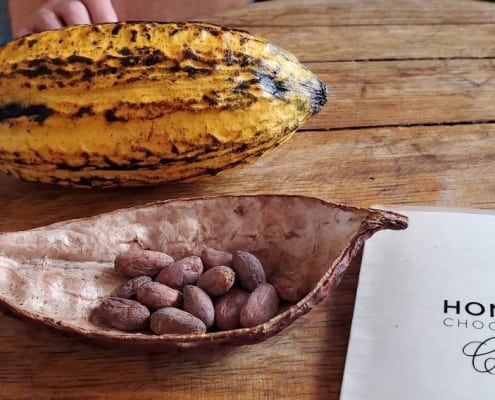 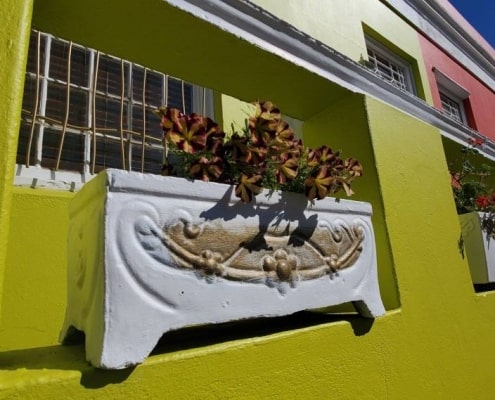 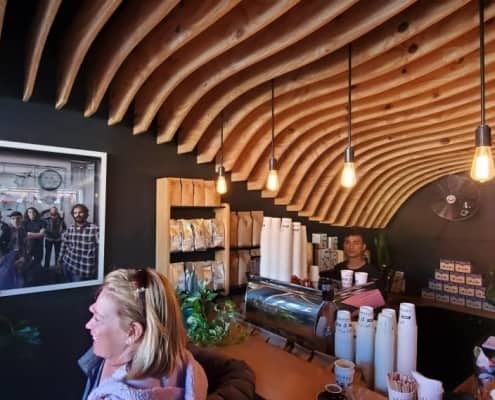 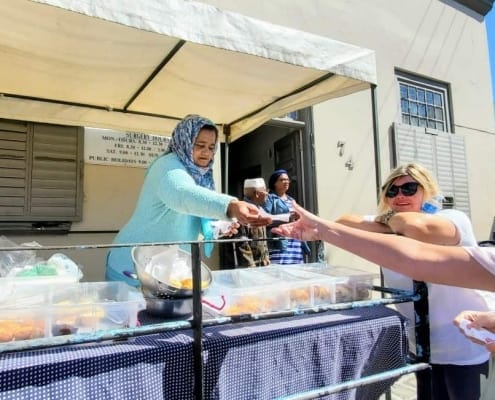 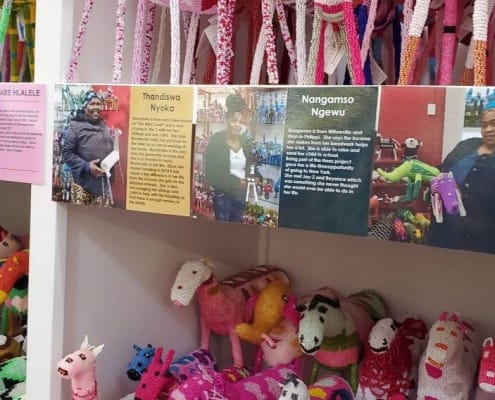 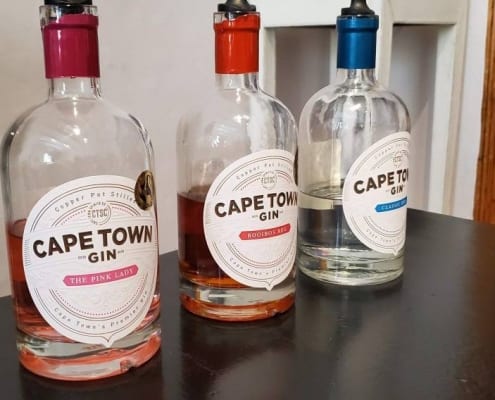 Cape Town has a Mediterranean-style climate: wet and cool winters, dry and warm summers. The annual average temperature in Cape Town is a delightful 17 degrees celsius / 62.6 Farenheit. As in the city of Cape Town itself, the weather on the Cape Peninsula is quite unique.

Mid November is early Spring below the equator which is a perfect time if you are heat sensitive! The country was in full bloom and spring had sprung, yielding flowers and greenery in the countryside surrounding Cape Town.

Cape Town, situated at the tip of Africa. Popularly known as the “Mother City”, the city has some of South Africa’s most important history and culture. The city’s beauty is complemented by Table Mountain, which sits majestically in the background.

In addition to its sheer beauty, Table Mountain is also famous for its extra-ordinary floral biodiversity; especially its fynbos. There are over 1500 species of plants found just on the mountain alone.

Cape Town is known for the “Cape Doctor”, a powerful south-easterly wind clearing the Cape Town air of pollution (hence the name “Cape Doctor”). Though forceful in character, the “Cape Doctor” visits infrequently, arriving only when the Fairest Cape needs to freshen up. The wind drapes the Table Mountain flat-topped summit with a white “tablecloth” of cloud.  Yup. 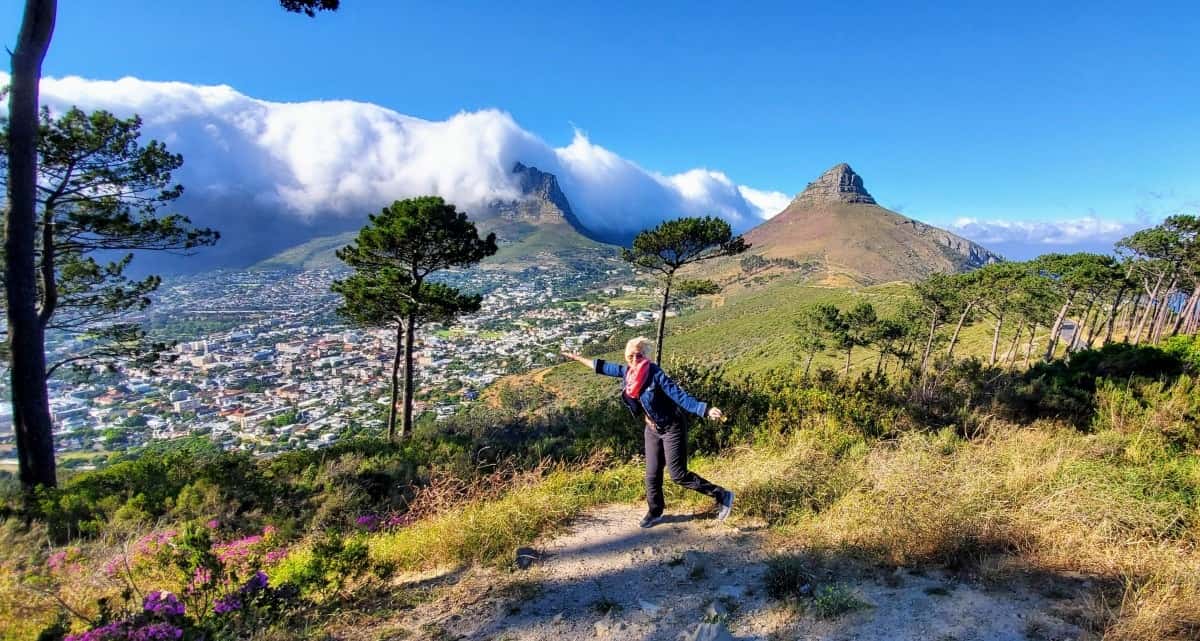 The Victoria & Alfred (V&A) Waterfront is situated on the Atlantic Shore, Table Bay Harbour, the City of Cape Town and Table Mountain – everywhere you look is something amazing!

This is South Africa’s oldest working harbor, the 123 hectares (300 acres) area and attracts more than 23 million visitors a year.

Prince Alfred, second son of Queen Victoria, visited the Cape Colony harbour in 1860 as a sixteen-year-old Royal Navy Midshipman on HMS Euryalus. He made a big splash with the colonials on this first-ever visit by a member of the Royal Family. The first basin of the new Navy Yard was named after him and the second after his mother. – Wikipedia

Where to stay in Cape Town: 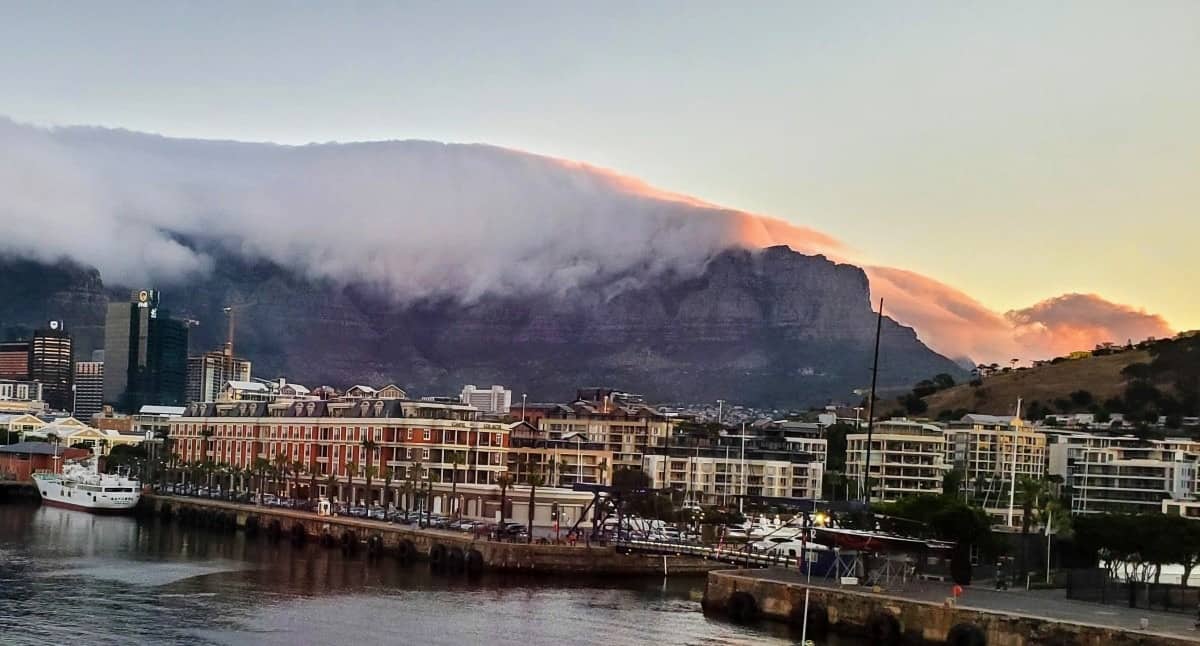 We stayed at the iconic Cape Grace Hotel, a signature fixture in the waterfront area. It’s lovely, classic, centrally located and one of the best places not only to stay but for food as well.You can read my full Google Review here.

Queen Victoria Hotel – another lovely hotel centrally located with nearby sister hotel (Victoria & Alfred) which has been recently renovated & also has the amazing Ginja Restaurant. You can read my full Google Review here

Both locations have amazing views of the Victoria & Alfred Waterfront as well as Table Mountain and Signal Hill and a delightful Cape Wheel ferris ride.

The Silo Hotel – built in the grain elevator portion of a historic grain silo complex occupying six floors above Zeitz Museum of Contemporary Art Africa (MOCAA) which houses Africa’s largest collection of contemporary African art. Part of the Royal Portfolio Hotels, this former grain silo has been retrofitted as a unique hotel with amazing views, restaurants, a rooftop and more. It’s super fancy and can be tough to get into but it’s well worth the wait & visit!

What else to do in Capetown: 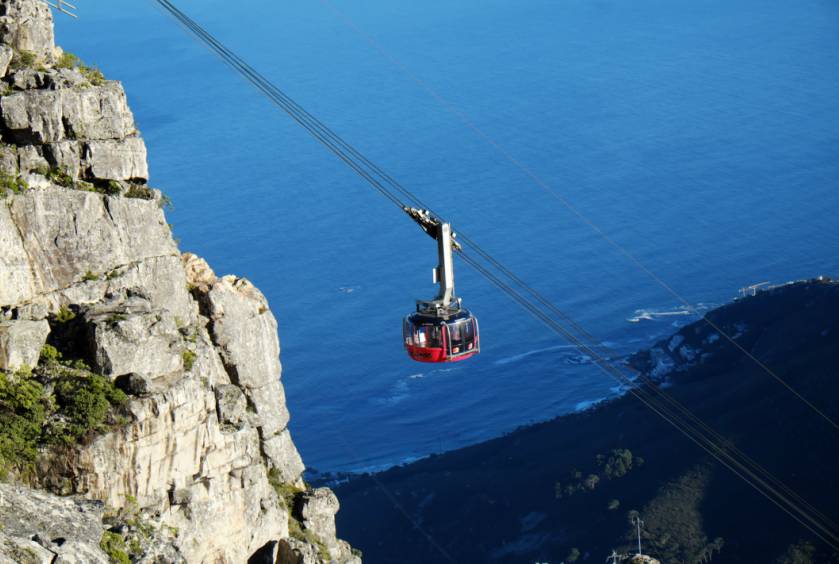 Robben Island –  Robben Island in Table Bay, which represents the country’s dark days, and is now a World Heritage site. The apartheid government created Robben Island prison, which kept one of the world’s most famous political prisoners, Nelson Mandela, locked away for 27 years. In 1994, a freed Mandela delivered his first speech as the first president of the democratic South Africa in Parliament. 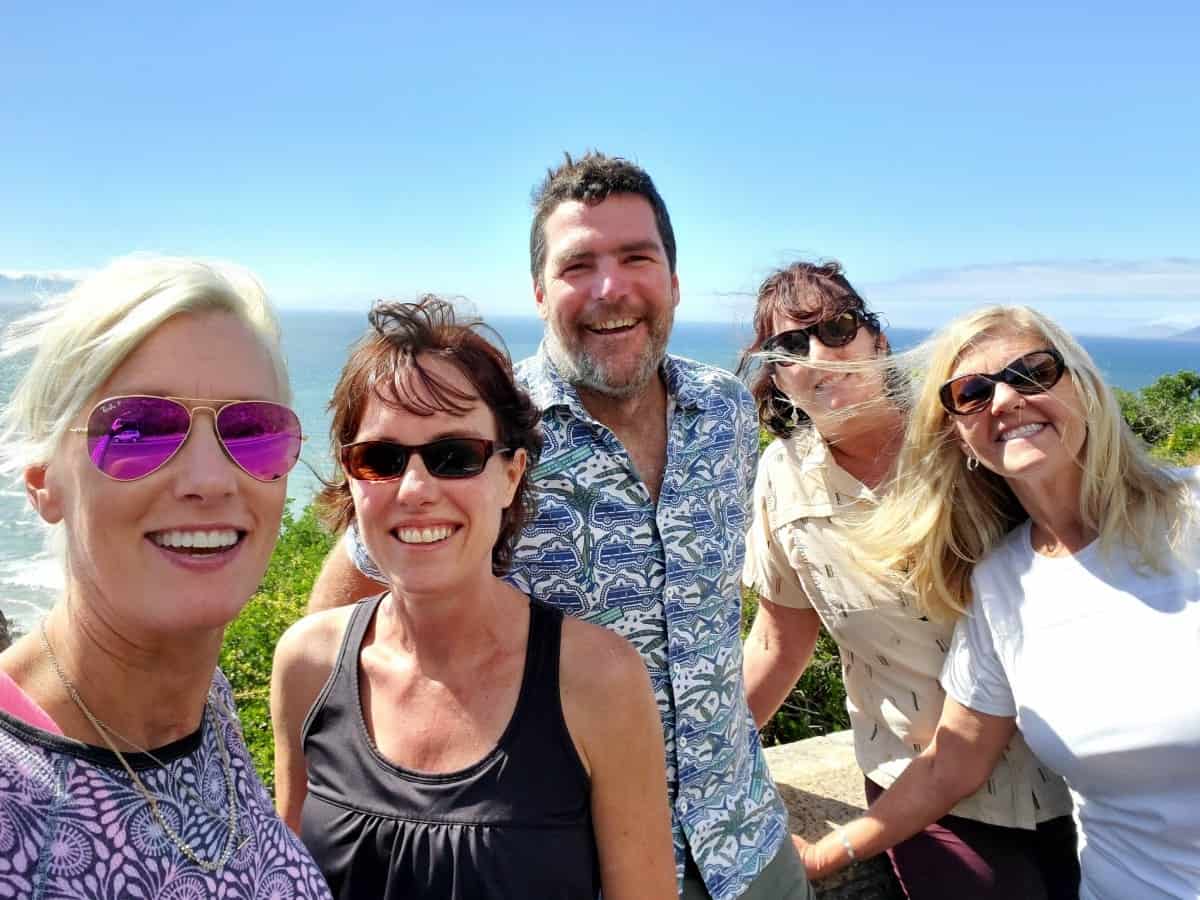 Knowledgeable & entertaining tour guides are a must and Escape+Explore did not disappoint James, Chizzy and the 2 other tour guides provided entertainment, history and knowledge of the peninsula, the environment, the flora/fauna and the history.  They actually have an Escape Explore Guide Academy that trains each of their guides. We covered 99 miles/159 kilometers in a day which included stops in Hout Bay, Simons Town, Boulders Bay, and Maclear Beach (the further point on the peninsula). The area is designated a Natural World Heritage Site & also boasts two marine systems at Cape Point – the cold Benguela and the warm Agulhas which results in startling marine life. The Peninsula has thousands of unique plants & trees, many of which are found nowhere else on earth (even more reason to protect the wildlife). 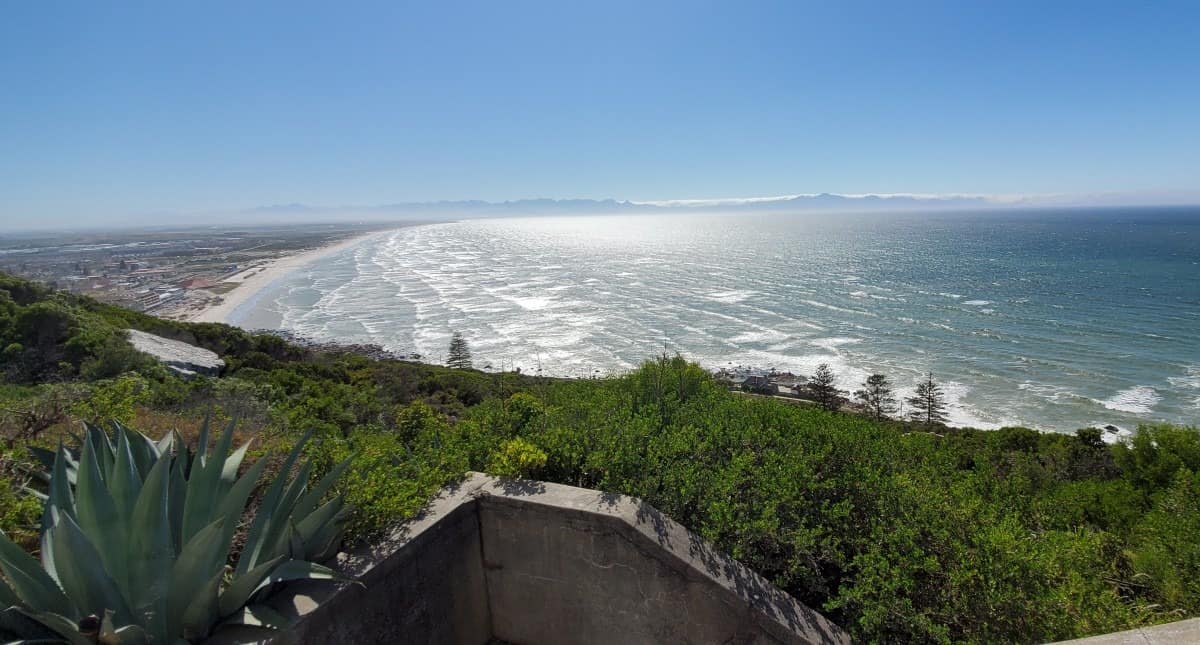 It was really important that sustainability be a key part of our tours. This was most evident when we stopped at Shark Warrior Adventure Centre- I was so impressed with the knowledge of the staff and that they only have tours that cause no harm to the wildlife and the environment (they’ve completed removed the shark cage feeding experience as it was very disruptive and was causing a lot of damage to the shark population).

Penguins do not have commitment issues! The African penguin is monogamous. It breeds in colonies, and pairs return to the same site each year. The African penguin has an extended breeding season, with nesting usually peaking from March to May in South Africa.

Slightly Cranky Mood Time: We visited in early November when the penguins were in their moulting period. In other words, we caught them when they were feeling less-than-glamorous. It takes roughly 13 days to shed their feathers and 20 days for the process to complete. The process of shedding is incredibly crucial for their survival. So basically these penguins were in a fat & scruffy period where they could not go in to the water to fish so they just had to sit there until their moulting period was over. 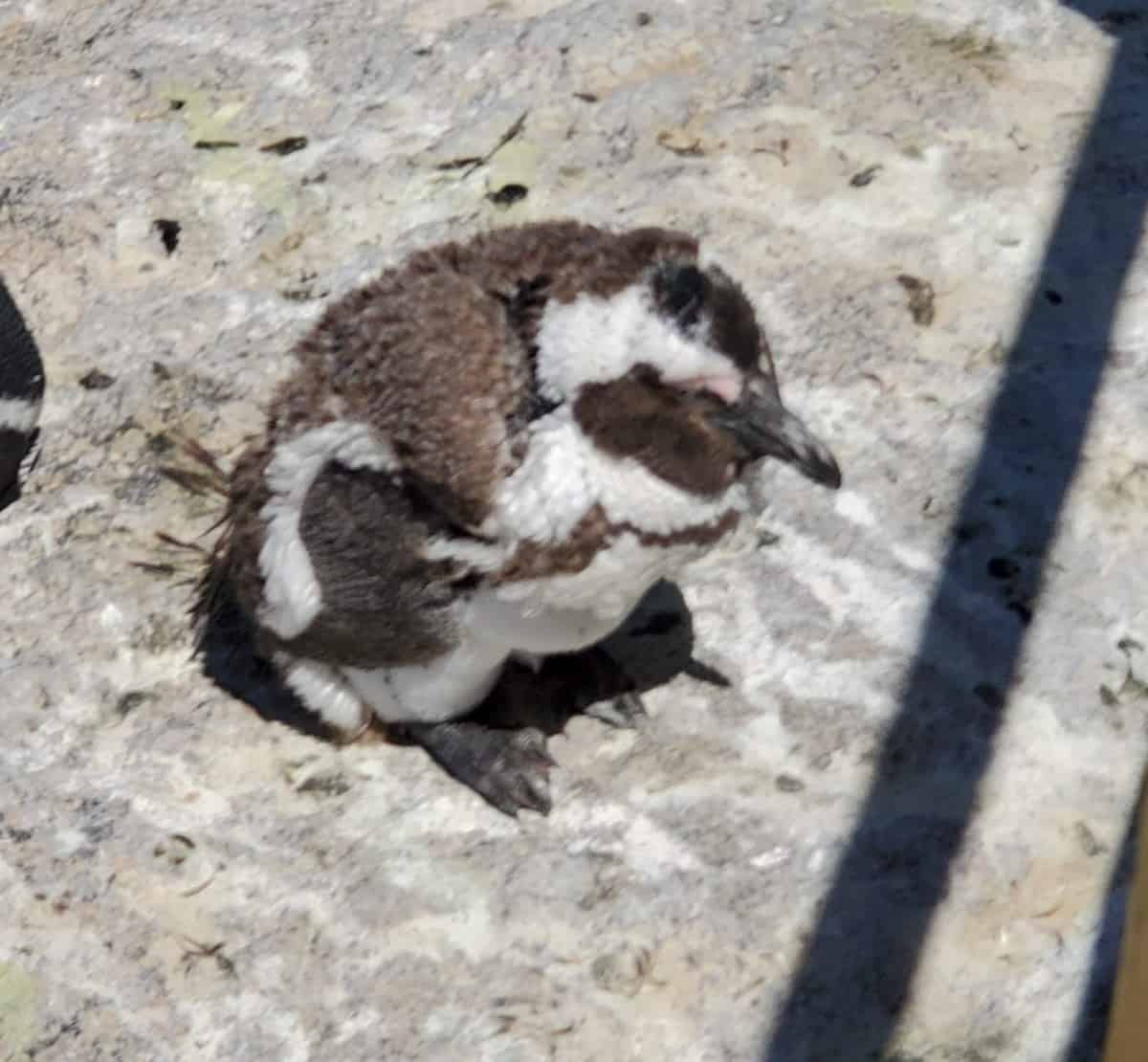 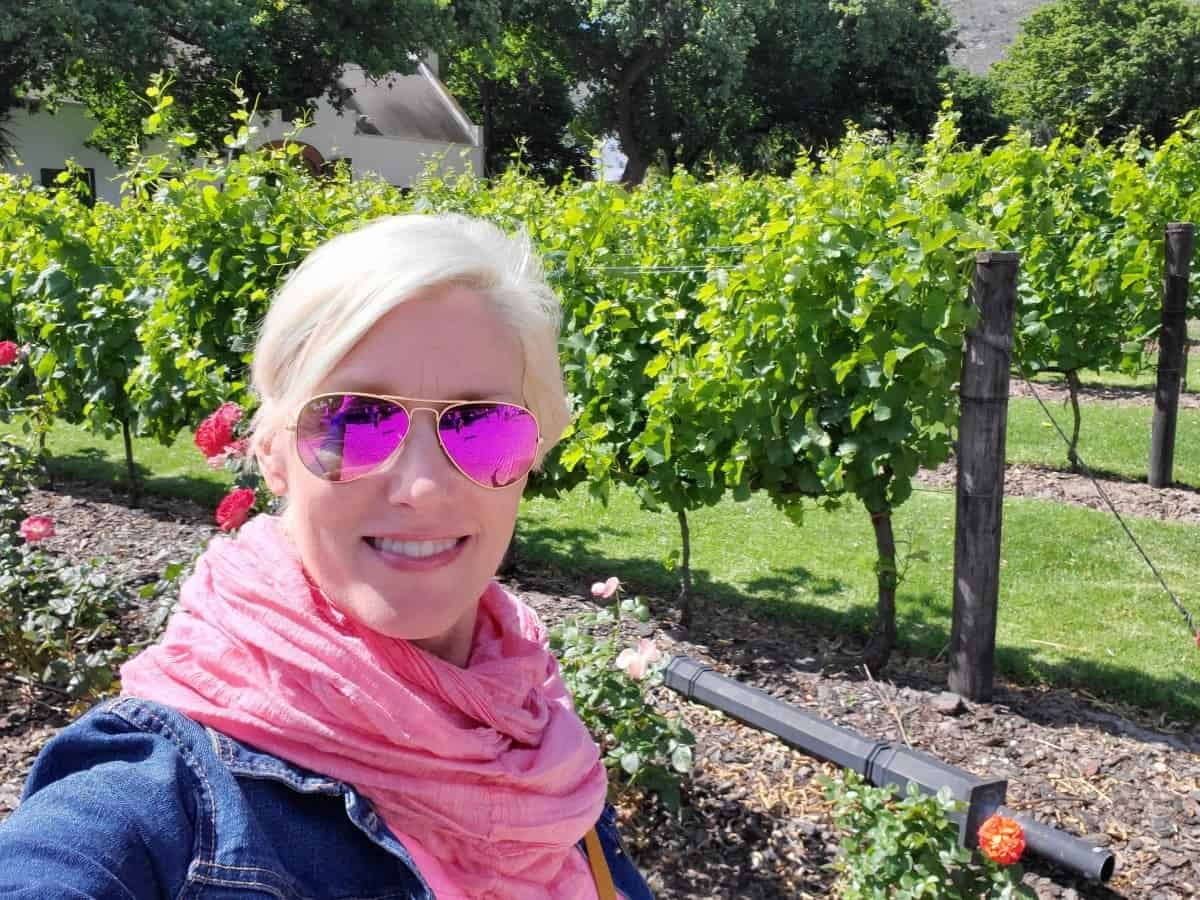 This area deserves several days if not more. A quick 50 minute drive from the Center of Cape Town, we headed west into the beautiful green countryside & mountains of the Stellenbosch area.

Why wine here? Because of the generally warm climate, South Africa’s red grapes in particular get very ripe and produce full, high alcohol wines. But especially in the Western Cape, the cool ocean breezes help the wines retain the bright acidity that keeps things fresh and food-friendly.”

Did you know: South African Bubbles are called Methode Cap Classique (MCC). This is the name used to refer to South African sparkling wines made by the traditional method —– Be. Still. My. Heart!

Boschendal was founded in 1685 and not only has tastings in the main house but also has over 40 cottages – yes, please to a farm stay! Nestled in an absolutely breathtaking area, it’s definitely an idyllic spot to relax and stay for as long as humanly possible. 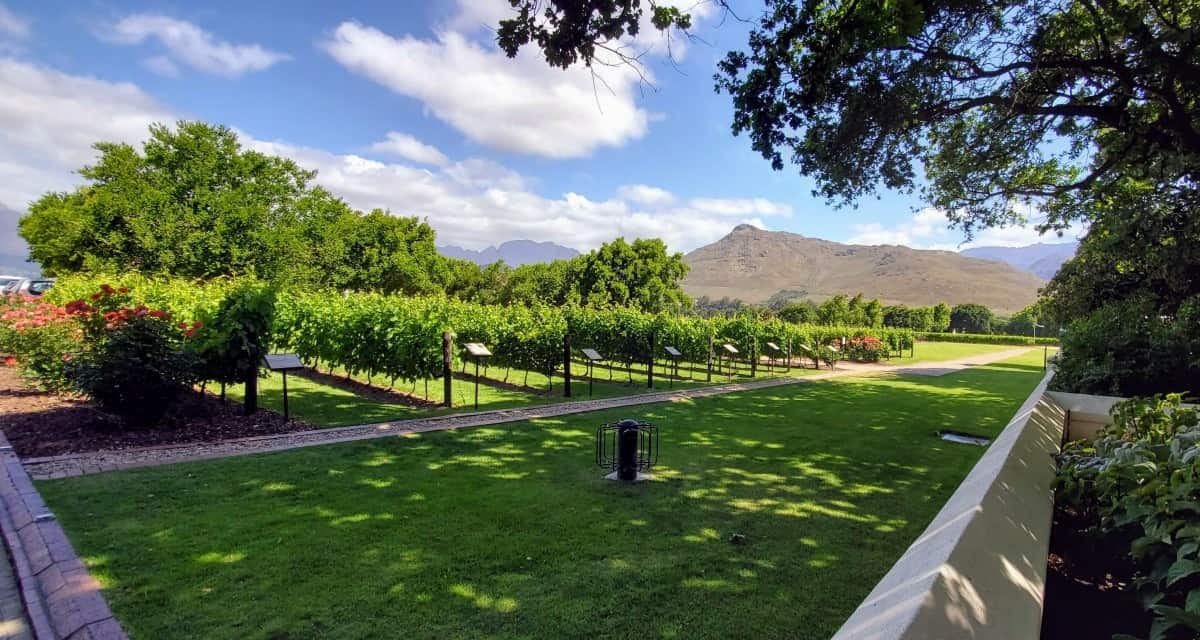 We had another quick stop at La Motte for a delightful lunch in the prettiest spot! A great spot for not only wine but shopping, museum and a trailhead for hiking in the Franschoek Valley.

The magical town of Franschhoek in South Africa’s Western Cape, nestled in one of the world’s most beautiful wine valleys. Offering a distinctly French flavour thanks to the French settlers who arrived in the region in the 17th and 18th centuries, the town is a gastronome’s paradise, with some of the country’s best restaurants found here, as well as more than 30 wine cellars. Attractions including the Huguenot Memorial Museum and the Franschhoek Motor Museum add to the appeal.”  TravelMag

Rating: A- – South Africa / Cape Peninsula / Cape of Good Hope – Wide open spaces, steep slopes (perfect for dodging and shoving zombies right over a cliff) – The population thins as you get outside of Cape Town so your chances are much better once you leave the crowded city area

Rating: C+ – Cape Town – Any urban area generally starts at a C rating simply based on population and Cape Town certainly counts as a large urban setting but the water front helps (although it is shallow so it depends if the zombies have aquatic skills). Robben Island is a possible safe haven which is ironic because it is famous for the prison where, sadly, Nelson Mandela was imprisoned for years). The prison closed in 1996 and is now a popular tourist attraction.  South Africa’s suburbs and businesses are wired with alarms and surrounded by high walls, barbed wire, electric fences and motion sensors which may not be helpful when the power is out but it definitely could be a plus.

What an absolute delight to travel with Founder Sandy Salle and work with her team. My entire trip from door to door was over 22,000 miles total and each step of the way was carefully planned and orchestrated. We began the planning in March of 2019 for a trip in November so I was fully prepared when it came to documents, what to pack, vaccinations, timing, etc. Our accommodations and excursions in both South Africa and Zimbabwe were top notch and high-end but also very personalized. Working with Sandy and her group gave me an incredible appreciation for the Power of Relationships when it comes to travel planning. Imagine traveling halfway across the world to find you were treated as family – that’s what happened while traveling with Hills of Africa.

For more information – click here and get your trip to Africa planned ASAP!

Next up: Zimbabwe & Victoria Falls! 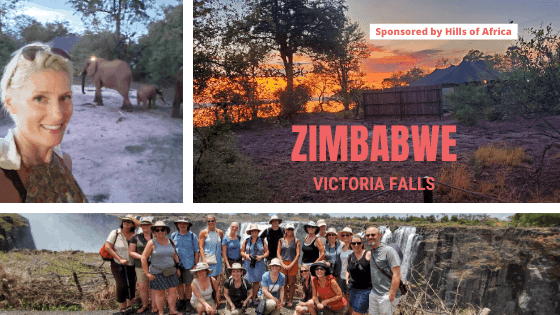 Mia On The Go

Are you receiving our posts via email?

Connect with me on the Socials! 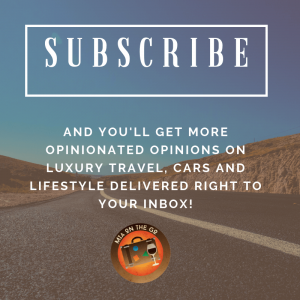 Want to join the discussion?
Feel free to contribute!

This site uses Akismet to reduce spam. Learn how your comment data is processed.

A Wonder Of the World – Victoria Falls, Zimbabwe Scroll to top